Geeky Things to Do in London: Harry Potter Studio Tour

Take all the photos you want

I went to the Warner Bros. Harry Potter Studio Tour by myself, and my tour guide and everyone working there were happy to take pictures for me, as I was a tourist Party of 1. Additionally, when I couldn't find a Studio wizard or witch, I had no problem asking strangers to take my photos.  I wanted the memories and I would probably never see those stranger again. Only 1 awkward situation came up, when I asked a guy if he could take my photo, he just looked at me and said "no". We'll blame it on the possible language issues, and give him the courtesy that he wasn't a complete ass.

“I loved Harry Potter before I went to the Harry Potter Studio Tour, but seeing the animatroics, electronics and robotics that went into the character creatures and sets made the engineering side of me fall in love with Harry Potter all over again.”

You absolutely must buy tickets in advance. If you have been to the Wizarding World of Harry Potter in California or Florida, you can walk around the park, the Harry Potter Studio Tour in London is the Warner Bros. Studio is where Harry Potter was filmed and is a privately guided tour. They highly encourage you to take pictures!

One can not simply go visit the film set of Harry Potter without dressing the part! I made an entire cosplay just for this experience! I rasterized the Marauders Map onto leather with a laser cutter at my local Makerspace, and sewed it into a leather corset. I designed the cloak pins, "I solemnly swear that I am up to no good", in Fusion360, and 3D Printed them on the Form2 in clear resin. The cloak fabric was actually meant to be for curtains, I found it in the clearance aisle at my local Joann's for $1.99 a yard.

Getting there when Apparition isn't an option:

From London, I took an Uber its was £70, it was about a 1-hour drive, I had planned on taking the train, but I was traveling by myself, it was raining and wearing a costume.

The Magical Engineering side of the Harry Potter films:

I loved Harry Potter before I went to the Harry Potter Studio Tour, but seeing the animatronics, electronics, and robotics that went into the character creatures and sets made the engineering side of me fall in love with Harry Potter all over again. "Often mistaken for a Visual Effect, the Chamber of Secrets door is actually a fully operational door created by the Special Effects team based upon sketches provided by the Art Department. The articulated snakes slither along slotted tracks and are powered by an electric motor hidden behind the door. Each snake was individually cast in resin and painted before being attached to the door with careful thought so that each snake would retract at the precise time avoiding a collision."

How to get an Invisibility Wizards Cloak

"Gifted to Harry in Harry Potter and the Philosopher’s Stone, the Invisibility Cloak features prominently in the films. Several different cloaks were made, including a version with a green fabric lining which allowed the Visual Effects Department to make Harry and his friends invisible in post-production. The cloak that can be seen at the Studio Tour was created from a special velvet fabric and printed Celtic symbols and ancient runes onto it by the Costume Department." I sewed a green cloak and have green hair, so when I flew the broomstick on the green screen photos I didn't show up, I had a real cloak of invisibility.

Get the Deluxe Tour, you might never get another chance to visit the Harry Potter film set again.

If you can swing the price, and you're a Harry Potter fan, go with the Deluxe tour! Total time I spent there was 4.5 hours, and I still wished I could have stayed longer. "After strolling down the Wizarding Street of Diagon Alley and peeking inside Ollivanders and Weasleys’ Wizard Wheezes, you can marvel at the breath-taking miniature scale model of Hogwarts castle. Once your guided tour is complete, you will enjoy a hot meal and drink served at a reserved table in one of our cafes. You will then have the option to re-enter the Studio Tour to revisit your favorite sets and pose for inclusive souvenir photographs and broomstick video flight over London just like the cast would have done during filming." 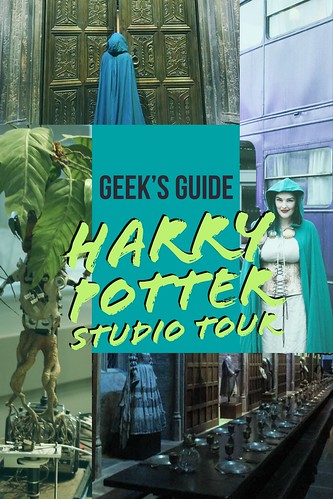 view more ramblings
Subscribe
Code. Cosplay. Ramblings of a Unicorn.
Thank you! Your submission has been received!
Oops! Something went wrong while submitting the form.

Cosplay: A History Book is Out Now